Remove from My Shortlist 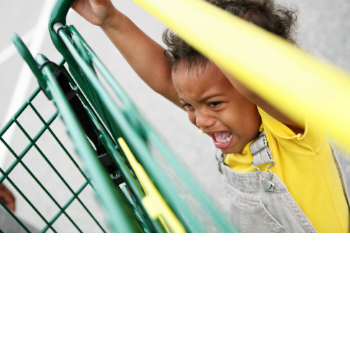 A toddler temper tantrum is the emotional equivalent of a summer storm; sudden and sometimes fierce.

Children between the ages of one and three are especially prone to these episodes and it is a normal part of their development. Though you may worry that you are raising a tyrant, at this age it is unlikely that your child is being manipulative. More probably they are frustrated.

Whilst your child is beginning to understand a lot more of the words that they hear, their ability to use language is still limited. When your child struggles to express how they feel or what they want, their frustration mounts.

Young children are still learning and don’t always understand or remember what they should and should not do. Children find it hard to remember instructions.

Some steps to help you manage toddler behaviour

Try to respond to behaviours and actions/routines in the same way each time. Include all family members and carers as children pick up very quickly when adults respond inconsistently. Do not give your child mixed messages, for example shouting at your child that they should not shout.

Ensure that your child is able to listen to you and that you listen to your child. If your child is having a tantrum, wait until it subsides then hold your child close and talk about what happened. Acknowledge their frustration and help them put their feeling into words, for example “you were very angry because….” Let them see that once they express        themselves in words they will get better results.

Use positive descriptive praise, “well done for tidying up!”. Do not use general praise such as good boy/girl as your child will be unsure what they are being praised for. Additional ways of praising include a high five, thumbs up, smile and hugs.

Try to ignore attention seeking behaviour ,this is called Strategic Ignoring. Try to praise the behaviour that is appropriate, and you would expect to see. For example, “stop that, sit still” could be changed to “show me good sitting, good waiting”.

Try to spend at least 10 minutes a day doing something together with your child. This doesn’t always have to be planned, but can be incorporated into your daily routines, i.e. having fun at bath times, reading a story at bedtime, on your way to school in the car or on the walk to school. Reading a book or playing a game both you and your child enjoy will help support your relationship with your child raising their self-esteem. Obviously, if you have more than 1 child within your family then special times will often need more time to be organised.

Handle with care; these should be something that your child values but should not have to cost money, for example, helping to tidy their toys is rewarded with a trip to the park.

Keep calm, it's not forever.

Temper tantrums usually start at around 18 months and are very common.

One in five toddlers will have a temper tantrum every day. One reason for this is that young children have difficulties with communicating and they want to do things for themselves.

They easily become frustrated and the frustration comes out as a tantrum. Once a child can talk more they are less likely to have tantrums; by the age of four tantrums are far less common.

When your child is swept up in a tantrum they are unlikely to listen to reason and they may respond negatively if you shout and threaten them.

Just sitting and being with your child during a tantrum is a good idea.

The storm of emotion they are going through can be frightening to them and they will feel safer knowing you are near. Your child may respond to being held.

Remember that you’re the adult

No matter how long the tantrum continues don’t give in to unreasonable demands or negotiate with your screaming toddler (it is especially tempting in public to cave in as a way of ending the episode).

Understand and accept your child’s anger – you probably feel the same way yourself at times, but you can express it in other ways.

By giving in you’ll only teach them that throwing a tantrum is a good way of getting what they want.

Your child is already frightened by being out of control and the last thing they need is to feel that you are not in control either.

Try to head off a tantrum-inducing situation

Try to work out why the tantrum happens and plan accordingly. If they fall apart when they get hungry, carry healthy snacks with you.

If they have trouble coping with moving from one activity to the next, give them a gentle warning before the change.

Alerting them to the fact that you are about to leave the playground, or it will be time for dinner gives them time to adjust.

Your toddler is grappling with independence so offer them choices whenever possible. No-one likes to be told what to do all the time.

Monitor how often you’re saying ‘no’. If you find you’re saying it routinely you’re probably putting unnecessary stress on both of you.

Try to ease up and choose your battles – does it really matter if they wear mismatched socks?

Watch for signs of stress

Although daily tantrums are a perfectly normal part of the toddler years you do need to keep an eye out for possible problems.

Has there been upheaval in the family? An extremely busy period? Tension between mum and dad? All these can provoke tantrums.

If, after the age of 30 months, your child is still having major tantrums every day talk to your health visitor or doctor.

If your child is younger than 30 months and has three or four tantrums a day and isn’t cooperating with any routines such as getting dressed or picking up toys, you may also want to seek help.

Shopping and how to survive with a toddler

Be prepared when you’re out shopping

Tantrums often happen in shops and this can be embarrassing and if you are embarrassed it makes it harder to stay calm.

Start by going out to buy one or two things only and build up from there.

Involve your child in the shopping

Talk about what you need and let them help you find the items on the shelf. You could write a list together and then help your child “tick off” the list as they are putting the products in the trolley.

Be prepared to remove your child from the shop and to go straight home.

Ignore others that may pass a comment or judgement – their comments really do not matter!!!

Most young children occasionally bite, hit or push another child

This does not mean that your child will grow up to be aggressive.

Toddlers are curious and may not understand that biting and hitting hurts.

Your child may bite or hit because they are hungry, teething, angry or bored

Young children can't easily tell you what's wrong. They may not want to share their toys, sit at the table or put on their slippers. Change can also upset toddlers, such as giving up their dummy or having a new baby in the family.

You must show your child that this type of behaviour is unacceptable.

Do not hit, bite or kick back, this will make your child think that it is acceptable to do this. Instead make it clear that what they’re doing hurts and that you won’t allow it.

Take them out of the situation

For example, if you’re with other children, place your child on your lap for a few minutes and explain that you’ll leave or ask the other children to leave unless your child’s behaviour improves. You must be prepared to carry this out if you want it to work.

You may need to help your child put a name to their feelings; angry, sad, cross etc. Children often go through phases of being upset or insecure and express their feelings by being aggressive. Finding out what’s worrying them is the first step to being able to help.

Show them that you love them but not their behaviour

Regularly praise your child’s good behaviour and give plenty of cuddles.

I'm still worried about their behaviour

Talk to your health visitor or GP – they may have other suggestions and can make sure your child has no serious physical or underlying issues.

Contact your local children centre for support and advice.